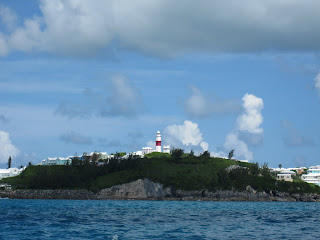 We spent the last couple of days making a few scuba dives out to the southeastern reefs and wrecks (Rita Zovetta and Pelinaion) again, with one dive along Libby Reef where we came across a lone anchor on a rocky coral ledge....big flukes, just a classic old ship anchor from the 18th century. It had been down there quite some time, judging from the large brain coral formations that had encrusted one of the flukes. It's always so cool to pick a random spot along the reef for a dive site and come across stuff like that acaught on the reefs; you feel like you are peeking into history a bit, and who knows? Perhaps we were the first people to see the anchor underwater after it was lost. You never know!
Friday afternoon we took the dinghy around into St. George's for some fresh vegetables, as our supply was getting low. We discovered that there is one vendor who comes into town on Friday afternoons, so we made sure to visit his truck and get what we needed, as we were hosting the McHarg's aboard for dinner that evening. The mangos, pineapple, kiwis and other fruit made a fabulous fruit salad for dessert, and the fresh broccoli was a perfect pairing with the rack of lamb and aparagus/mushroom risotto that was on the menu. We followed dinner with a movie: "Bottle Shock", since both Warren and Christine are wine aficionados and hadn't seen the movie before! 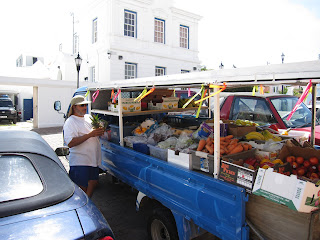 Ron selecting a pineapple from the veggie truck
Saturday we took the dinghy around the east end of the island to Fort St. Catherine, and had a lovely lunch at the St. George's Beach Club next door. Ron and I have been sampling the Bermuda Fish Chowder where ever we are....it's delicious, especially when a bit of sherry or rum are mixed in at the table! It was scorchingly hot, so after lunch, and a quick look at the outside of the fort (the interior being closed on the weekends) ,we snorkeled and swam along the beach in front of the fort, and picked up a lot of beautiful sea glass to add to Karyn's collection aboard. 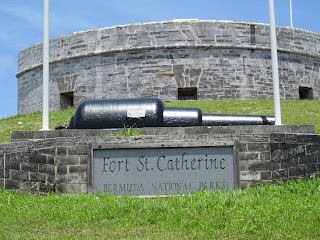 Walking up to the fort's entrance 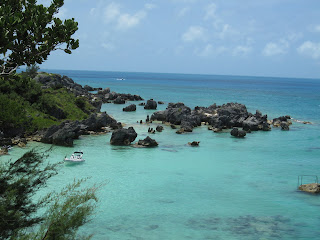 View of the cove in front of St. George's Beach Club,
taken from the outer Fort St. Catherine wall 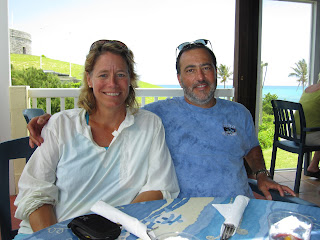 Karyn & Ron after lunch, ready for a swim 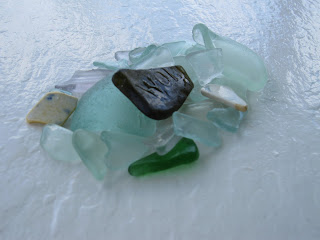 Some of the Bermuda sea glass we found on the beach;
one piece has some raised lettering on it...

Later that afternoon, we moved the boat off the mooring, as its owner had come by to say he had another boat coming to use it tomorrow. Sad to leave our secure spot, but we dutifully moved and anchored around the point near Cable Bay, closer to the McHarg's. It was lovely to see our boat on anchor from their patio, although we later realized that we no longer had any internet connection! After searching fruitlessly for a connection in Cable Bay, we reluctantly moved back along the coast, finally settling in just north of our old mooring and closer to the hotel. It's nice to be able to access their free internet wifi from the boat, so we are set for the moment!
Hugs to all, Karyn and Ron at 11:39 PM