We took advantage of having the scooters and took an early morning ride down South Road to the Coral Beach Club with the intention of having breakfast there, but after walking to the lower terrace, we discovered a sign that said "Members only, no cash or credit cards accepted." Whoops! Ally had been there as a guest with Alexis earlier in our time here, but she didn't realize it was members-only, and was rather mortified. Even though we're "pirates" at times, we decided the better part of valor was to slip away quietly before we were told to leave. It was a pretty ride though!! So, we ended up having breakfast at The Paraquet (a rather expensive greasy spoon cafe) and laughed at our adventures. 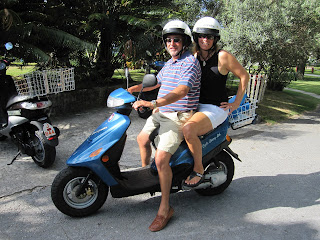 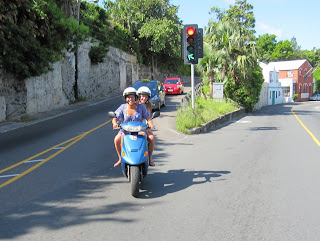 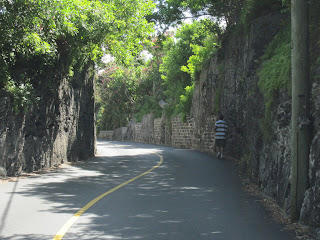 In the afternoon, we went over to Castle Roads, along with many other local boats who were hanging on anchor. It's like the Bermudian version of Maryland's Fairlee Creek, a place to congregate, raft up and party! While the girls were swimming, Ron kept busy, scrubbing and chiseling the marine growth off the bottom of the dinghy, which was an exhausting procedure. We definitely have to get the bottom painted prior to our going to the Bahamas this winter!! We should have done it before coming to Bermuda, in fact, something that Ron now regrets, but it's cleaned now and we're only here for a bit longer, so it isn't dire.

We met up with all the folks we had dinner with last night: Heather aboard her little runabout at Castle Roads, and the Simmons aboard Shindig, who came by and rafted up with Equinox in the mid-afternoon. They hadn't seen Equinox before, so Scott and Helene and their friends Jillian and Rick came aboard for a tour and to relax, bringing Rum Swizzles for all!! Yum!

To cap off a fun day, we four dinghied over to St. David's Island and met up with Warren, Christine & her parents, Bert and Audrey, and Alexis for a dinner on the back patio at The Black Horse Tavern. They've been telling us that The Black Horse has the best Bermuda Fish Chowder, and so of course, we had to sample it. The Black Horse even has their own sherry pepper sauce -- definitely as authentic as it comes!! And the chowder was delicious indeed, thick and rich. Both Ron and I had the curried conch stew, which received rave reviews from us too. A great night!! 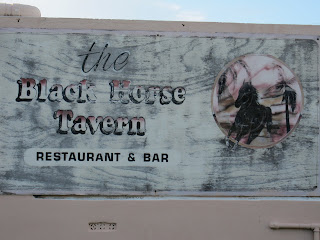