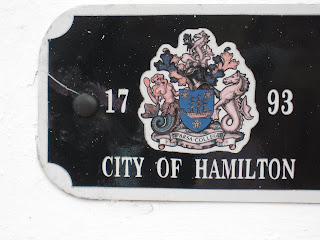 The last couple of days we went into the town of Hamilton, to get our visas extended through July. When we cleared Customs with the boat, they only allowed us a 21-day visa, (although the boat itself was cleared to stay for 6 months) so we had to go to the Government Adminstration building in Hamilton to request the extension from Immigration. We actually ended up going there twice, since the first time we were there, we waited a good half hour or more only to find out that visa extensions would only be handled between the hours of 9-12, and of course, it was now 12:45. OH well! Returning to town the following day allowed Ron to re-visit to his new favorite store (A. S. Cooper Man) where he got decked out with some new Bermuda shorts and shirts!

Yesterday we did get the extension, however, and afterwards, had a lovely lunch with Bob & Jackie Smelkinson from Baltimore, who were visiting here with their kids and grandkids on the Norwegian Dawn cruise ship. (Bob is a member of Levindale's Board of Directors, which is how Ron got to know him.) When they heard we were bringing Equinox to Bermuda during the same time that their cruise ship would be stopping here, they wanted to get together. Nice!! We had a delightful lunch with them, along with Jackie's sister, at the Barracuda Grill on Burnaby Street.

In the afternoon we all did more island exploring on Charles Island (next to Castle Island) and did some snorkeling. The islands are craggy with sharp jagged limestone so are somewhat difficult to climb, but the views are so worth it! Gorgeous! Sea birds like the white Bermuda Longtails soar past you and the colors of the ocean bays and coves are incredible. Ally likes to climb to the highest points possible, of course. 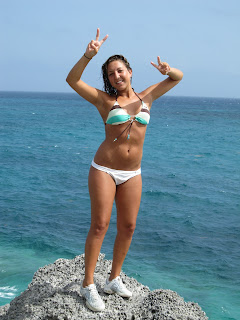 Ally with the Atlantic behind her

Unfortunately, the seas have been so rough due to the past few days of wind and rainstorms, that the visibility was really poor. We have only managed one dive during our stay and Ron is really chomping at the bit to get diving. In evening, since it was Karyn's birthday, we went out for a most fabulous dinner with the McHargs at The Harborfront, part of the Bermuda Underwater Exploration Institute. Again, as usual, a fun time was had by all!! All the birthday wishes were very appreciated! 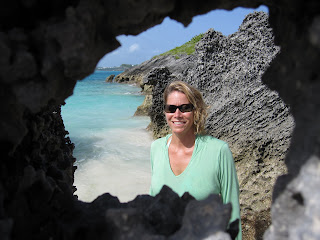 Today was more squalls (with rough seas, thus no diving) although we did do some bicycling around Tucker's Point and along the South Shore in the afternoon when there were "sunny breaks" and no rain. The roads are quite narrow and riding on the left still seems a bit different, but we're getting more comfortable with it now. Bicycles seem safer than driving, that's for sure!! Upon return to the boat, all three of us took the dinghy over to St. George's to mail a few letters and to restock the vegetable supply. We neatly found a well-stocked fresh produce vendor directly across from the post office, and early bought out his truck-load of veggies and fruit! Tomorrow we'll bike to the farm and get fresh eggs. 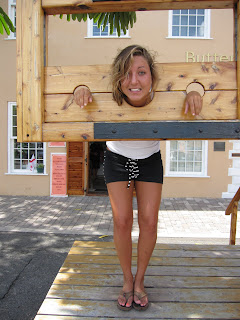 Ally in the stocks in St. George's Town square
Hugs to all, Karyn and Ron at 4:06 PM