At the invitation of Audrey and Bert, we spent another Sunday on Trunk Island, along with pretty much the entire Smith clan: Christine & Warren, Malcolm & Julie, Susan & Norris, all their kids and assorted cousins and friends. Soooo fun!! We came aboard Commocean, Warren & Christine's boat, but since the tide was too high to make it under the causeway bridge, we headed out Castle Roads, around the outer reefs, in through Town Cut, along the Ferry channel and into Flatt's Inlet where we entered Harrington Sound. Warren had the bimini on his boat deliberately built low enough to make sure it could pass under the Flatt's Inlet bridge, where the tidal flows in and out at such a clip that they have a stop light on the bridge to direct the flow of boat traffic. It didn't look like Commocean would make it under the bridge, but she did! 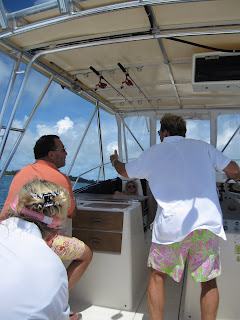 Warren explaining one of the cuts through the outer reefs 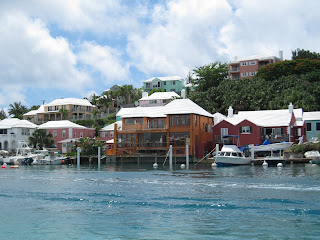 The houses along Flatt's Inlet 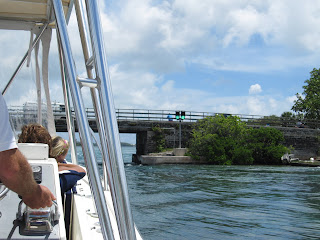 Approaching Flatt's Inlet Bridge: Green Light!!
It was a treat to go along as guests aboard a boat rather than be captain and crew, plus to go fast...totally fun! Once on the island, we grilled out, drank wine & beer, swam, and checked out the calico clams that are indigenous to the Sound -- a challenge to find, but such gorgeous checkerboard shells! (After photographing them, we made sure to return them to the water since they are protected.) 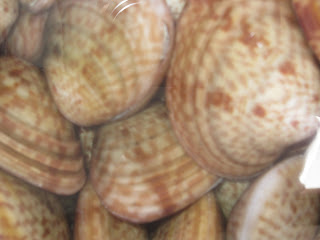 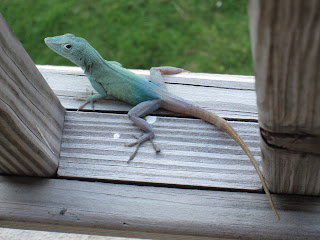 A rock lizard on the porch at Trunk Island
Ron got his dive fix for the day when he helped Warren attempt to install a new mooring while we were out swimming and enjoying ourselves. (New chain is needed for the mooring block before it will be finished.) After swimming and playing with the kids, we grilled out yet again, as it was dinnertime. The kids were totally spent after all their activities! When we realized that we would have to rush to catch the low tide, we did a hasty group clean-up of all the left-overs & dishes, before wishing Bert and Audrey well. We managed to catch the tide so that we could eke our way back under the causeway...but after creeping under the first bridge, we missed the second bridge by inches!! Darn!! That meant returning around the outer reefs in the dimming light, and we really needed to be at Castle Roads before dark.... 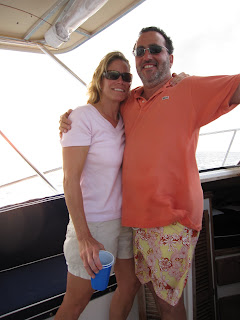 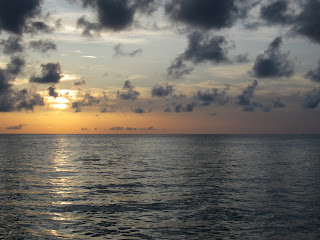 Sunset over the Atlantic inside the reef on the north shore

So, it was a gloriously fast sunset cruise along the south shore in order to beat the darkness to make it back into Castle Harbor. We made it in just enough light, and took a wide course to avoid the breakers and reefs...after all, in Bermuda, one respects the reefs!! 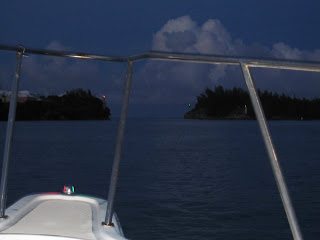 Leaving St. George's Town Cut at dusk
Hugs to all, Karyn and Ron at 2:55 AM