Monday was a bit blustery for diving, so we went out for another bicycle ride around the north side of Bermuda. This time we circled Harrington Sound, went through Flatt's and out along North Road to Spanish Point, named so because in 1603, Diego Ramirez, captain of a Spanish galleon spent 3 weeks there in Bermuda with his crew to repair their ship. The map created by Captain Ramirez during his visit that year is the first ever known map of Bermuda. We enjoyed the views of to the north, and the dramatic cliff hillsides. Returning through Hamilton, we circled back to Tucker's Town, and completed a 27-mile loop. 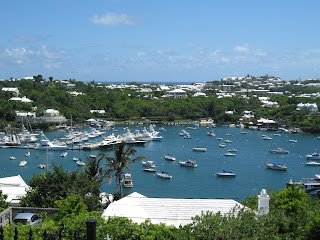 View of Hamilton Harbor from Fort Hamilton ramparts
In the afternoon, Karyn and Jordan took a taxi ride through Smith Parish to Fort Hamilton. We explored the Fort, entering across its drawbridge and hiking around its ramparts filled with cannons, gun emplacements and even old shells then down into its interior (a bit creepy, being very dark, moldering & wet). The dry moat encircling the fort is now filled with amazing botanical garden. A meandering path leads through a thick forest of soaring bamboos, palms, palmettos and allspice trees, and flowering shrubs of all kinds. 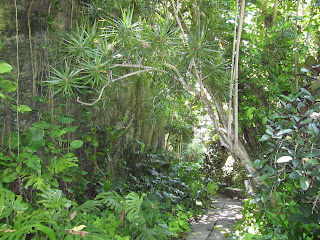 View of the dry moat gardens 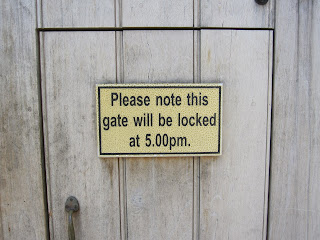 When Karyn & Ron visited Bermuda in 1989, they explored Fort
Hamilton in the late afternoon, and ended up getting locked inside. They
finally found a caretaker to let them out just as it was getting dark
....clearly this sign resulted from their misadventure!! 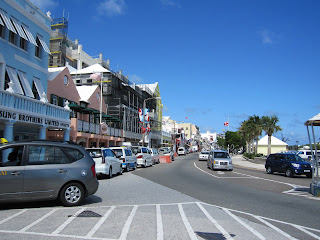 Looking up Front Street, Hamilton
Hugs to all, Karyn and Ron at 2:11 AM