Today was Taylor's last day of diving, since she is leaving tomorrow afternoon and can't fly within 24 hours of diving. Unfortunately Ally's ears were still bothering her, so only Ron, Taylor and Karyn went out on the dive. We went out to Libby Reef where we found the lone anchor before, and indeed, found it again. Visibility was thankfully better than yesterday, and we had a nice dive, noting the numbers of blue parrotfish, queen and princess parrotfish, sergeant majors and spotted butterflyfish. Ron also found another large Atlantic Deer Cowrie shell, which he gave to Taylor to take home. It was a nice dive to end Tay's visit here.
In the afternoon, we took the dinghy around the north side of St. George's Island and anchored in the cove by the St. George's Beach Club where we stopped for lunch (stalked by a very young rooster walking about the tables in the restaurant). The view was amazing, although the service was not as good as it was previously, unfortunately. The rooster didn't help any, either! 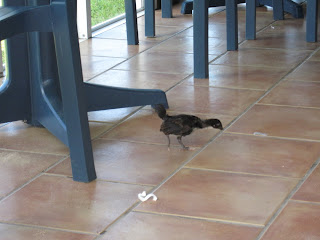 Afterward, we explored Fort St. Catherine. Originally built in 1612, Fort St. Catherine was rebuilt and its fortifications strengthened 7 times over the past 3 centuries. Now a unique museum, the powder magazine is restored to 19th century war readiness and is home to a collection of antique weapons, and in the old artillery store there is a gallery of dioramas depicting Bermuda’s history. The fort was defended by these absolutely huge cannons: 5 Woolwich Rifled Muzzle Loader cannons, each weighing 18 tons. The shells they fired weighed 400 pounds and were capable of penetrating thick iron plate. We walked about the fort and were really fascinated by the history it explained. The Fort closed at 4:00 p.m. and we literally were the last to leave -- but didn't get locked in though! 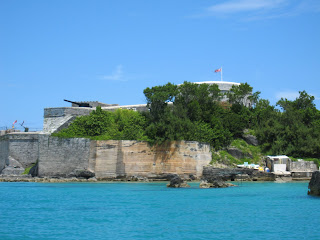 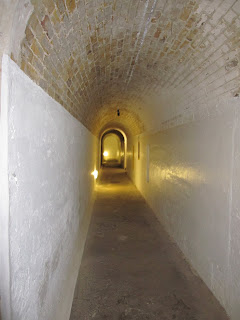 The hallway to the magazine stores 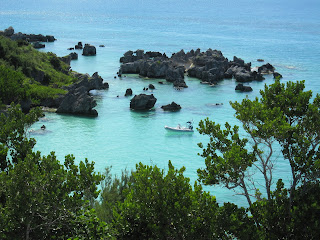 View of the dinghy anchored in the cove below the Fort

We stopped by Dowling's on the way back to the boat, since we're now starting to think about what needs to be done to prepare for our trip back to the States. We need to fuel up, so have ordered some 3500 liters of diesel for the return trip and were trying to confirm the day we could get the tanker truck to deliver it. We want to leave next Wednesday (weather permitting) after we put Ally on the plane home, but Dowling's told us we need "Customs Form 5" before we can fuel up. So, we stopped in at Customs, who told us that we have to clear out before we are issued Form 5 and receive the duty free fuel. Not exactly a user-friendly situation, is it, since we want to fuel up on Tuesday and be ready to leave the next day after Ally's at the airport! So....we shall see how it goes. Hopefully the weather will be better on the east coast than it is right now and we will have a smoother passage than the one we had coming over. Not that it was bad, mind you, just a bit rainy and lumpy!

In the evening Ron ferried over Christine's parents, Audrey and Bert Smith, from the Mid- Ocean Club dock to come aboard for dinner. They are the loveliest folks and since they hadn't seen the boat before, we thought to invite them for dinner. Audrey and Bert brought us all sorts of gorgeous fresh produce from the Windy Banks Farm: cucumbers, onions, and even (gasp!) Bermuda bananas. Yes, we know bananas are bad luck on a boat, but they didn't know that....and Audrey was most upset when Christine told her so on the phone just prior to their arrival on the boat. No worries, though as Ron and Ally were delighted....they love bananas! (Karyn hates them, so they don't get them very often...and on the boat, not at all!) In this case, we will ripen them and use them up in good health and with good intentions before we depart, just in case they have some valid claim to bad luck while underway! The Smiths also have some sweet corn that we will pick up when we have a chance to slip by Boat House on Harrington Sound in the next couple of days. Our dinner aboard consisted of rack of lamb, steamed green beans, mushroom risotto and Karyn's mango, avocado & crab stack before a bit of dessert, and it was appreciated by all! A lovely way to finish the day!
Hugs to all, Karyn and Ron at 9:29 PM