Well, we managed to dive the Pelinaion this morning, for Taylor's first dive in Bermuda. The conditions yesterday were too rough, and they were only marginally better today, but...they were better!! We used the mooring buoy on the dive site and Tay and Karyn were the first ones in, and waited for Ron and Ally to follow. Taylor had never done a wreck dive before, and the Pelinaion had a lot to offer. She was duly impressed with the huge propeller, and the three large deck winches. As this dive site has done before, new things emerged that made me feel like I'd never seen the dive site before myself. This time I noticed the anchor right next to the propeller -- also quite large and imposing -- and we found a number of beautiful swim-throughs in the reefs just beyond the wreckage that were very cool. The number and variety of stony corals here continues to amaze me: spiny sea rods, knobby brain coral, boulder brain coral, star coral in abundance. We also saw a couple of large grouper, which we hadn't seen before. The only glitch in the dive was that returning to the boat was a bit of a navigational challenge, as we got a bit turned around in the reefs, (Ron blamed the Bermuda Triangle effect) but we sorted ourselves out. Afterwards, Taylor was full of enthusiasm for wreck dives!

After the dive we cleaned up and headed over by dinghy to Flatt's Inlet for lunch at Rustico's (delicious Bermuda Fish Chowder -- one of the best we've sampled so far!) and a visit to the Bermuda Aquarium, Museum and Zoo. We tied up at the aquarium pier, and spent the afternoon meandering through the place. Everyone loved the Museum and its interactive exhibits, historical artifacts and detailed information about Bermuda's history, flora and fauna. Very cool!!

Ally took a lot of fun photos in the Aquarium, and was fascinated with the peacocks walking about the zoo. While the flamingos look pretty in the Caribbean exhibit area, we found you really want to stay upwind of them! 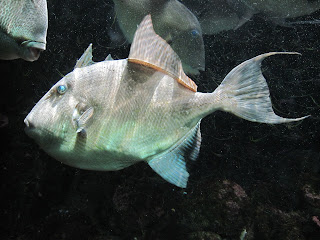 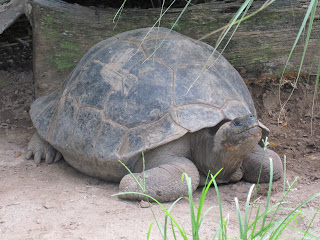 One of the zoo's Galapagos tortoises 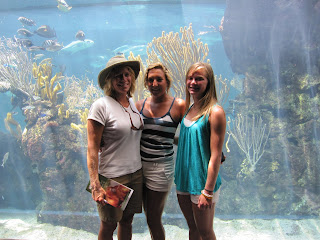 Inside the Aquarium
When we left the Aquarium, the current was ripping through the Inlet at such a clip, we couldn't believe it! It was creating a small waterfall under the bridge, so of course, we had to go through it! We waited for the green light and zipped into Harrington Sound against the current, and then turned around and raced down the waterfall and back out again. Quite the rocket ride! 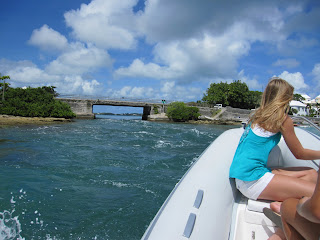 Navigating the current into Harrington Sound

We had a quiet night aboard -- dinner and a movie -- before we shut down all the generators and went up on deck to stretch out on the foredeck cushions in the gorgeously silky night and star gaze. The stars here in Bermuda are absolutely phenomenal -- no ambient city lights to ruin the view, so one can see the entire milky way dusted across the sky! Ally had Jack Johnson playing softly on her iPod, which was the perfect accompaniment for the whistling frogs singing backup vocals and the waves chuckling along the shore line. Totally mesmerizing and beautiful!! We all counted shooting stars -- I saw at least 8 -- and fell asleep listening to the night sounds around us. A magical time and place!
Hugs to all, Karyn and Ron at 6:56 AM