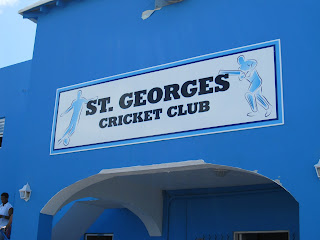 Cup Match is Bermuda's famous annual 2-day cricket match, held on Emancipation Day (celebrating the official end of slavery in Bermuda on August 1, 1834) and Somers Day, honoring the "Father Of Bermuda," Admiral Sir George Somers, one of Bermuda's founders. The whole of Bermuda grinds to a complete halt for the two days to concentrate on a single cricket game. Over 7000 people attend the match one or both days, and many more camp out along the beach fronts and listen to the play-by-play on the radio.

The competition began officially in July 1902 between two Bermuda cricket clubs, the Somerset Cricket Club in the west, and the St. George's Cricket Club in the east end. The venue alternates every year between the two clubs; this year it is being held on Wellington Oval in St. George's, so Ron and Karyn took the dinghy into Mullet Bay, just outside St. George's. We tied up to the public dock there, then walked to the stadium where the 107th annual Bermuda Cup Match was being played.
While Ron grew up in Hong Kong and played cricket as a young boy, Karyn didn't have a clue and had never seen the game before. It's a lengthy game -- some say playing cricket is fun while watching it is like watching paint dry, but tell that to the rabid fans we saw cheering, drumming and hollering in support of their team! We meandered about the stadium, trying to find a vantage point from which to watch the match, and finally ascended some scaffolding to get a better view. We joined a group of fans from Somerset who proceeded to take us under their wing and explained the game to us. It was so fun!! We stayed for quite a while, watching the match and trying to follow its events. Wickets and overs, runs and outs, it was all rather baffling at first, but eventually it started to make sense. Just being up in the stands with everyone was a blast!! We got the hot hint regarding the best local delicacies to be found, as many vendors and beer stands surround the stadium selling their wares. Karyn tried the Shark Hash, while Ron preferred his Conch Stew with rice. The hash was interesting...looked like a dried pesto paste of sorts, rather green for itself! But, when in Rome...! 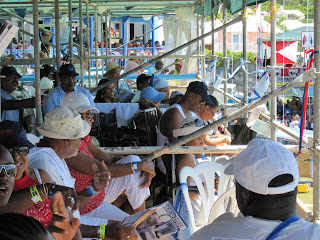 Part of the Somerset group who educated us on cricket

After our lunch break we returned to our vantage point at the "New Heartbreak Hotel" section of the stadium, but this time got stopped by security -- apparently it was a private viewing area into which we had wandered previously! No one minded our joining their party, though. So, as pirates, we still got in for another rum swizzle there before moving on to wander around a bit more and watch the games from ground level. 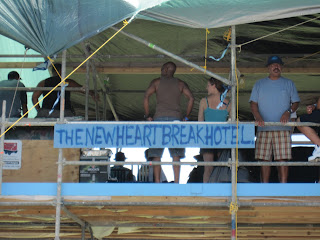 Our vantage point in the stands 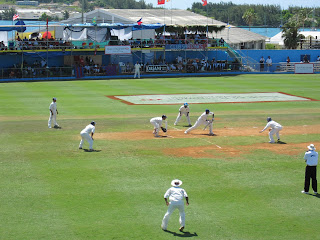 The Cup Match underway, with Somerset at bat

We really enjoyed our time at the match, but returned back to the boat in the late afternoon to get ready as we had guests coming aboard for dinner, Lee and Judy from Baltimore, and Lee's sister Estelle. They were in Bermuda aboard the cruise ship Norwegian Majesty, and knowing they were coming, Ron had invited them to come to the boat for an early dinner. They were really delighted to see a bit more of Bermuda than just St. George's harbor and the usual cruise ship shops, so we ferried them in the dinghy out to Equinox on anchor in Castle Harbor. Everyone was quite nimble getting into and out of the dinghy, despite the unusually bumpy conditions in the harbor and Ferry Reach due to the Cup Match revelers out and about in their boats (think Memorial Day AND Labor Day weekend back to back!) but no one complained! Of course the tide was up, so we had to go through our gyrations to lower the dinghy radar arch, so they got a very realistic view of things to consider when getting around by boat instead of car! Nevertheless we had a lovely evening showing them Equinox, trading stories about travel and growing up, just generally enjoying ourselves. Dinner worked out well, and they all said visiting with us made their trip to Bermuda, which was so cute. We got them back to St.George's just before sunset in calm seas and a gorgeous evening with the whistling frogs starting to sing.
Hugs to all, Karyn and Ron at 12:20 AM