Our niece Jordan left and her younger sister Taylor has now joined us aboard. When we took Jordan to the airport via dinghy, though, we were thwarted by an extremely low tide that prevented us from using the dock across the road from the airport's main entrance. The water was so low and the winds were so rough there was no way to even attempt to climb up. It was interesting to note, though, that now the sign on the dock was changed to "NO docking of boats allowed any time"....clearly we were observed using it for Jordan's arrival!!

We tried to get out for a dive on the Pelinaion in the morning, but with the winds from the southeast, the conditions were simply too rough. We didn't want to push it; Taylor needs a quiet refresher dive, since it's been a few months since she dove, and diving in such rough conditions was not advisable. SO....we came back into Castle Harbor, where the winds and waters were calm, and went wakeboarding (Ally) and waterskiing (all 4 of us) instead. A great morning's activity, and it put us all in good moods. It felt great to ski!! 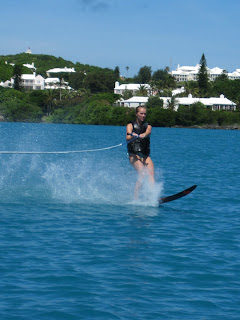 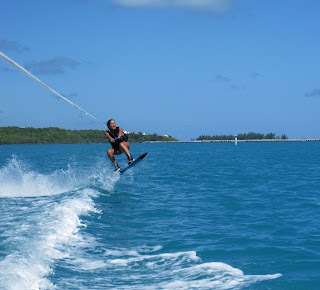 Ally jumping with the wakeboard 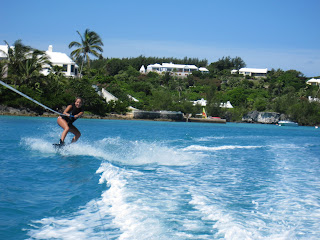 Ally riding the other way, having turned 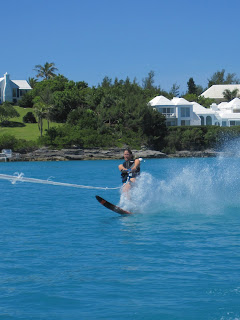 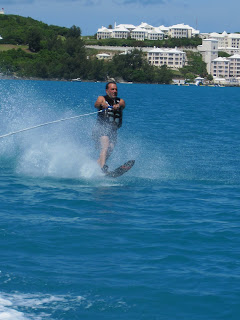 The girls joined some friends over at the Tucker Point Beach Club for the afternoon while Ron and I took the dinghy into St. George's to get a few more gallons of oil for the generators. We underestimated our generator use, so have changed out the oil and filters more often than we anticipated. Not an issue with all the extra filters we have aboard, but we did want to get a few additional gallons of the Shell Rotella-T SAE30 for the gensets. Luckily for us, there is a Shell oil depot on the island, and actually, a Shell station right in St. George's -- Dowling's -- that carries it. So, we bought a few more gallons after having a light lunch on the waterfront.

It was so calm as we came around Ferry Reach that we decided to explore the north sound a bit and again, were amazed at the calm conditions there. We went back to the boat for dive gear and set off to explore the reefs on the far north side, using one of the Bermuda Marine Resource guide to find a mooring. We had no idea how far it was across the North Shore Coral Reef Preserve -- over 8 miles! But conditions were so calm, it was an easy ride there and we had good light to avoid all the coral formations that popped up all over the place. The dive was a pretty one as far as reef structure and the variety of soft corals, sea fans, sea whips, and encrusting hard coral, but surprisingly, very few fish. We did see a beautiful pair of angelfish and many of the ubitquitous parrotfish, but even those seem paler and less vibrant than their southern counterparts. In any event, we got a dive in and we enjoyed that!
Hugs to all, Karyn and Ron at 7:59 PM