The winds have moderated a bit down to 5-10 knots at times, but remain southerly, so with the swells, seas are 2-4' outside the reefs here by Castle Roads. We managed another dive this morning, taking the girls out to see the large cavern in the reef that we'd found yesterday off St. David's. Unfortunately though, the poor visibility was back with a vengeance, along with a pretty stiff current that was less than fun to swim against as we made our way along the reefs. In the cavern, though, there was little current, so Ron explored a bit further, going out an exit across the far side of the cavern before returning back inside. I discovered a group of juvenile high hats clustered under a long, low ledge near the left side entrance, which was fun to see. We didn't stay long, but returned the way we had come, this time zipping along with the current as we returned to the anchor line. I find it a bit spooky when the visibility is limited and you can't see much of the reef until it comes looming out of the mists as you get closer. Ally was a bit bothered by her ears this dive, which has been an intermittent problem for her, so the dive didn't rank up there with one of the better ones. There's always tomorrow! 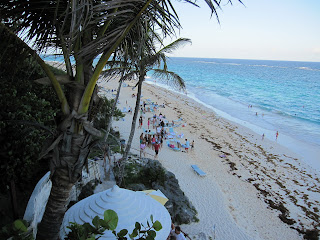 After filling tanks and an afternoon of reading and relaxing, swimming and jumping off the top of the boat, we took the motor scooters over to Ship Shape, the McHarg's little yellow cottage on Harrington Sound, before we all went to The Coral Beach Club for their Tuesday evening dinner. Coral Beach is at an absolutely stunning location on Bermuda's south shore, an old-world club that has been around since the mid-1940s in its present form, but the oldest dwelling on the property was built before 1650. Drinks and dinner were lovely, but it was rather sad also, since it was our last night together with the McHargs. They are leaving for England tomorrow and Spain thereafter for a vacation; Taylor will be playing in a tennis tournament in Spain, which is part of the reason for the trip. Being with Warren, Christine and the girls -- just simply spending time with them and their extended family has added so much to our time here, words are inadequate!! We all enjoy each others' company so much; Ron and Warren are great buddies and have felt that way since the day they met. Being included in their social whirl of activities, meeting all their friends, getting invited to different dinners and outings has made us all feel so included and welcome! Coral Beach was no exception; what's not to like? The setting was beautiful, the wine delicious and good friends were together! 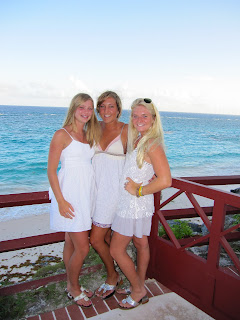 Taylor, Ally & Alexis on the stairs at the Beach Club 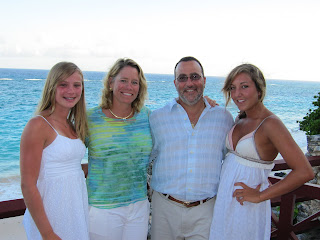 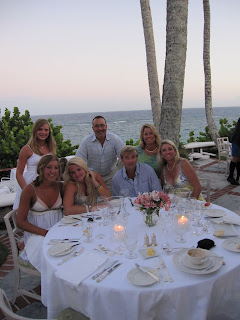 The two families together!
Hugs to all, Karyn and Ron at 12:06 AM